At the close of 19th century, two pastors from central Alabama—William Sheppard and Samuel Lapsley—stepped into the middle of Africa and planted gospel seeds that would bring about the Presbyterian Church in the Democratic Republic of the Congo [DRC]—one of the largest protestant witnesses on the continent.In the 20th century other dedicated Presbyterians from central Alabama would follow those first two Presbyterians into the Congo where their work, combined with God’s awesome grace and the joyous spirit of the Congolese people, would do great things in the name of Jesus Christ.On May 8, 2004, in the City of Kananga, DRC, lay and clergy leaders from the Congolese presbyteries of Nganza and Tshibashi and from Alabama’s Presbytery of Sheppards and Lapsley met to build a clear partnership.

Former Executive Presbyter Terry Newland said, “God keeps nudging us together. Obviously, God wants us to work together.” In this partnership our primary objective is:

To share in the Good News with one another
as brothers and sisters in Christ.

May 2005, leaders from the Presbytery of Sheppards and Lapsley spent time in the Presbyteries of Nganza and Tshibashi, meeting your brothers and sisters who serve Christ in the Congo.

In late October and all of November that same year, the two executives from our partner presbyteries—Rev. Maurice Tshiyoyo of Nganza Presbytery, and Rev. Augustin Mukendi of Tshibashi Presbytery—spent time in central Alabama, becoming better acquainted with us. As they toured our churches and other places of interest, the events were video-taped. Before their departure, the video footage was edited and placed on a DVD which the execs took back to Congo to show the people of their presbyteries.

Since then, members of all three presbyteries have taken time to visit each other, both in the Congo and here in Alabama, and continue to support and pray for each other. 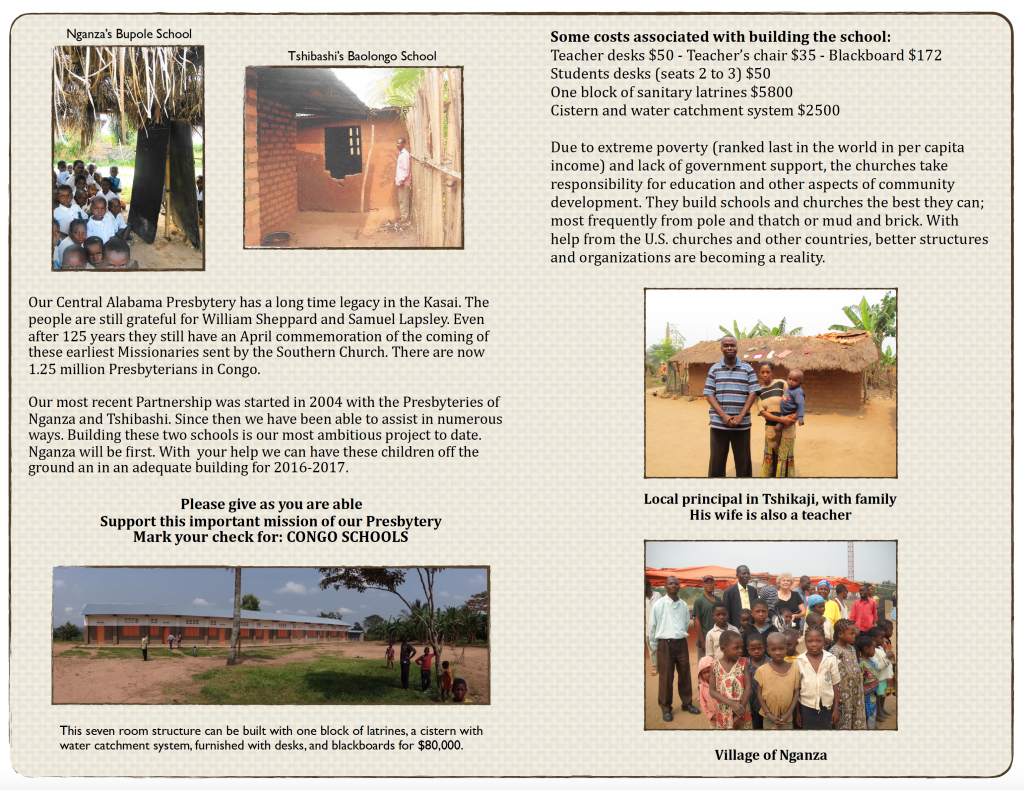