The Presbytery of Sheppards and Lapsley 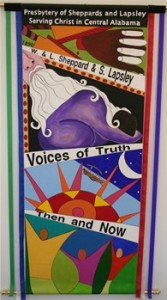 William Sheppard and Samuel Lapsley left Alabama and began their work for the Lord in 1890 to help give the Bakuba people a voice for equality and fairness in a place of unkindness and inhumanity. They desperately needed a boat to travel the Congo River and Presbyterian children from Selma started a fundraising event that allowed people from all over the US to contribute. The boat was built, shipped to Africa in crates and assembled on site by 1901. It was in service until 1903 when it was destroyed in a mighty whirlpool and overpowering waters which killed 23 missionaries and native Africans. In 1892, Lapsley died from a fever after only 18 months of work in Africa. A year later, William married Lucy Gantt, a teacher, who joined her husband in the mission field and was the first woman to enter the Bakuba kingdom and who opened the first school there.

The proud and beautiful Bakuba people of the Congo region in Africa refused to labor as forced slaves in the harvesting of rubber for wealthy foreign industry. The conniving and greedy King Leopold of Belgium was a tyrannical dictator who only wanted wealth for himself. The top panel represents the terrible atrocities such as the cutting off of hands and limbs of the People, in an effort to intimidate them.

The second panel represents the many years of oppression of the People by King Leopold whose beard was as pure and white as snow but whose character and humanity were not.

The third panel reveals what happened as a result of missionaries William and Lucy Sheppard and Samuel Lapsley leaving Alabama to live and work in Africa. It was as if God made the darkness disappear and His Light began to shine on the People.

The bottom panel reflects God’s influence on the lives of His followers. Their voice was heard and the oppressed were freed. The People danced. God is Good!

This work was commissioned by the Presbytery of Sheppards and Lapsley in 2005 and created by Laura Reddick-Reichert, Elder, Grace Presbyterian Church, for the General Assembly of 2006, Birmingham, Alabama.